Words From Her Mother

I will admit – sleep may be the most peaceful thing a person can do but it was so very hard to watch. The term “looked like death” took on a whole new meaning for me and every beep of her monitor sent a jolt through me. I have a crick in my neck from snapping my head to check her heart rate! But she stayed stable all weekend. Her rest allowed me to process and develop a more healthy understanding of just how sick Little is.

When Little wasn’t sleeping she was retching. Her body ran out of things to actually throw up pretty early on and she had a stretch or two when she would retch for an hour+. I only mention this because it led to my loosing my temper for the second time in this journey. “Cost/Benefit Ratio” is a phrase used quite a bit around here and so when they refused to give Little any medication for her nausea because of its potential affect on her heart I understood. When she retched for an hour and a half and couldn’t go to sleep I informed the nurse that the cost/benefit ratio had shifted and they needed to get Little medicine now. To her credit … she did.

They have now taken Little off the two medications that were given to help her heart stabilize.  Her heart has remained steady and the sleepiness and retching has gone away with the meds! Praise the Lord!

The Lord has been gracious throughout this journey and I can only recall a couple of times where the stress has seemed to mount and overwhelm. Understandably, this weekend was one of those times. I could feel the tension in my chest but really knew something had to give when we had a particularly trying nurse on Monday.

It was between 7:30 and 8 AM and Little was still asleep; I was still lounging on my bed/couch. The nurse came in and told me I needed to have the goal of having the shades up by 9:30 AM and that I would need to comb Little’s hair and brush her teeth that day. Instead of it rolling off my back, I was feeling patronized and having to take captive some pretty harsh thoughts. It was evident that stress was reaching a critical level and so I called in back-up (Jeremy) and we swapped places.

It was great to spend a night in my own bed, hug our other two children, and shower without flip-flops! KB slept with me and thought it was hilarious that I sat up ready to help Little with a barf bag in the middle of the night . Tuesday was full with laundry, getting an oil change for the van, taking KB to the doctor, and getting a filling for myself before heading back to Denver for a date night with Jeremy!! Sounds like it wasn’t restful but it was just enough to get me ready to head “back in”.

And how did I get to have a date night with my husband while our family is living in two cities??? Two of my dear friends flew in this week to help with the house and kids.  Monica came in yesterday and stayed with the kids last night. Debbie flew in this morning and Jeremy picked her up at the airport on his way back to Fort Collins. The kids are thrilled to have them here and may be struggling to remember that these are MY friends not theirs!!! 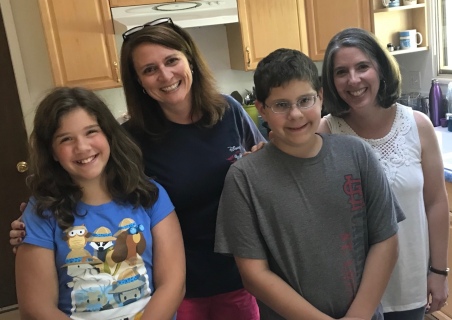 **I wrote this whole post and left off the biggest news. Little was moved to 1A on the transplant list. She isn’t on machines but the dangerous developments of the weekend allowed for her to be made top priority as an “exception”. Praise the Lord for this and how it may speed up the process of being chosen for transplant.  His will be done.

9 Responses to Words From Her Mother