One of my dearest friends moved away from St. Louis just a month before we did; she moved south to Florida and we moved Northwest to the Front Range. That’s not the only difference in our moves. Listening to Regan talk about getting settled included stories of delayed furniture delivery, catching up with friends she already knew, attending a church they were already familiar with, and getting her boys enrolled in several activities for personal development. As I listened to Regan it was very clear that if she was going to feel settled she was going to have to get her home unpacked and in order. Perfectly understandable, right? Right.

Getting my house settled took very little time. One thing was that my furniture was here waiting for me when I pulled into the drive. (Regan’s wasn’t delivered for a month – ridiculous!) We are renting so there wasn’t any remodeling to do – just a little painting – and we downsized just a touch so getting settled was just a matter of finding a place for what we have – not finding new things to fill new spaces. Still, once the house was in working order I still didn’t feel settled.

A few things have happened recently that shed light on this area of life and allowed me a peek into just one more thing that makes my family unique: we had doctor appointments.

It started in March with Little’s 11-year old well visit. Pediatrician? Check! I felt my body relax a bit as we left the office that day but didn’t think anything about it. Just a couple weeks later we went to the Ophthalmologist and got new glasses for Little and another specialist under our belt. I called my mom on the way home and I was surprised at how giddy I was about something as silly as an eye doctor appointment.

Enter a broken arm . . . a trip to the emergency room at Denver’s Children’s’ Hospital.

Next an EEG at the local hospital. 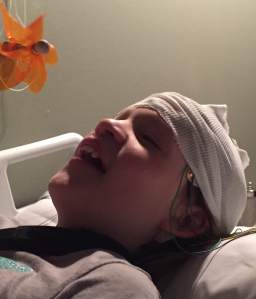 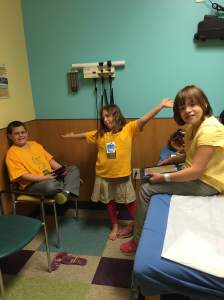 – the last one just this week to meet our new Neurologist.

It wasn’t until this meeting that I realized the correlation between getting our doctors in a row and feeling settled in Colorado. With every doctor we have seen, the tension has relaxed a bit in my shoulders and I am more willing to think about getting plugged in here. I mean, I am getting plugged in with the medical community and they are, after all, our peeps.

It’s a strange realization; makes me eager to call the Orthopedic surgeon and get an appointment on the calendar.

The EEG went well – pretty posh compared to our experiences when Little was a toddler. She got to lay down in a bed instead of sitting upright in a huge chair. She didn’t have to fall asleep which is a blessing since she doesn’t fall asleep with medicinal help. The results show no abnormal brain “firing”. So, a basic summary is that we skipped an entire night of sleep and took an expensive test and we know nothing more than we did before. Nice.

The arm is doing well – Little has to wear the sling at school just to remind her peers to be careful but the doctor says that it’s healing quite nicely. I don’t know if I believe him – the x-ray still looked pretty daunting. (Another reason to get an appointment with the local orthopedist.) She doesn’t hurt and for that I am thankful.

Meeting the Neurologist went well.  I am NOT a fan of Neurologists in general but had found one in St. Louis that I liked as much as is possible. There is only one Neuro doctor that travels to Fort Collins, so we made the appointment with her. She was very nice and very easy to talk to. I told Honey that I wouldn’t necessarily invite her over to play board games, but she will be a good doctor, I believe. She listened to my preferences, gave me bottom-line explanations, and interacted with my daughter instead of with only me about my daughter. I am truly thankful. (The funniest part of the visit was the conversation with the nurse on the way to our room. She asked if there was any religious belief or conviction that would affect any decisions or treatment of my daughter. It took me so off guard I couldn’t think straight. I told the nurse “no” and that I thought we were good. Then I paused and added. . . “ultimately it depends on what unfolds and what kind of things you start suggesting for my daughter. I’ll let you know if any of you start pushing up against my religious beliefs and convictions – it has happened before.” So weird.)

The appointment with the Orthopedist will involve discussing Little’s bowed ulna and getting an update on that. Also, the left side of her body is growing at a different rate from her right (makes sense in light of her brain not being able to exchange information between hemispheres) and so her left leg is a couple of inches longer and her foot is a half-size bigger. This has started to affect her spine so we need to work to get her walking evenly. Of all the things listed here – this concerns me the most and has the most potential to undo me.

Thanks to you faithful friends who lift us up and care about our family. We are just one or two doctors away from making Fort Collins our home. I’ll let you know when the task is done and then we’ll plan your visit.?!

This entry was posted in family, Little. Bookmark the permalink.