I know KB just had a birthday but I am going to reflect back on Bubba’s for a minute.  That’s right – – in August Bubba turned 8.  He wore what I have decided is his last birthday shirt and I took a pause to be sentimental.  My little dude is 8.  It’s not that old but it is a solid boy and not a touch of little is left.  Sigh.

One of God’s mercies to me is to let me work in the building where my children are going to school and I got to go downstairs at lunch and take treats to my boy and sing Happy Birthday to him along with his friends and teachers.

He was sweet to stop handing out the Angry Bird cookies long enough for me to take a picture.  Don’t you just want to kiss that face??

After school we grabbed up two little friends and went to play glow-in-the-dark mini golf.  I learned a lot about each little guy while watching them.  The lady who worked there took my money and said, “I am assuming you don’t want to keep score?”  I laughed and said, “That’s just because you don’t know these guys.  They would never let me get away with not keeping score!” 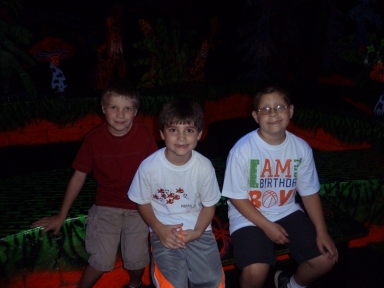 Little Luthin did a fabulous job and made thoughtful putts and I decided he could be a golfer, that one.  J is the most competitive, by far.  Bubba was worried about losing but easily re-directed toward having a good time and relaxing.

After golf we headed to Johnny Rockets for shakes (Bubba’s request).  These guys are hilarious.  The waitress brought menus with games and puzzles and not another word was said until they were completed and drinks were emptied.

It was a great day and I look back and think: I love my boy and who he is becoming.