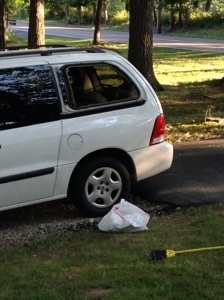 I never told you, but back in August our only son threw a rock and broke the back window out of the van. This is the window that the repair guy said is made in such a way that the rock had to hit just right for it to shatter like it did. Our boy – – such a talent.

Anyway, I’ll tell you the story about the window in a bit (it is some of the best parenting we’ve ever done together) but for now you just need to know that it costs $400 to get that fixed. A month before, we had taken that van in and *bam* paid $1200 for repairs. We agreed at this point that any other big repair would mean time for a new car. . .

This past week the van started screeching when I tried to stop. Metal on Metal is an awful sound and I told Honey we had to take it in. Then the sound started showing up when I was moving forward and I could tell something was wrong with the tire bar. Honey took the van to our trust mechanic and called that afternoon to tell me that the repairs would cost $1350. I hung up the phone so that I could leave the office and find a private place to hyperventilate but couldn’t get away from the desk and Honey called back. He said Mr. Mechanic had called back to tell us that the van wasn’t fixable – – it seems the brackets under the back of the van are so very rusted that repairing the framework would be next to impossible and definitely not financially preferable. So, just like that the van was declared dead – – time of death 11:42 a.m. October 9, 2013.

We have resolved ourselves to the fact that we are a one car family for the time being. That was easy and exciting for the first two days and then I started trying to figure out how we would do soccer carpool. The natural response was to start praying that the Lord would take care of the details and, just like Charlie Peacock sings, “Dear friends, He is not slow in keeping His promises as some understand slowness to be.” Friday morning I was chatting with a friend. She was telling me about her long weekend in New York and I answered a question she asked with the fact that our van had been put out to pasture. Within moments she was back with a key to her honey’s truck and our family had a second vehicle for the next five days.

The truck has been a blessing on many levels. (1)The kids have enjoyed riding in a vehicle that’s windows roll down. Hilarious. (2)KB had asked if our next car could be a truck (she is her mother’s daughter) and, wah-lah, a truck. She told me, “When I ride in Mr. Porter’s truck I think that I’m in heaven because I asked God if we could have a truck and he let us use this one.” (3)We got to all the soccer games on Saturday without any messes. (4)We were reminded of God’s faithfulness to us, His kiddos. (5) The three Kicks played in the bed of that truck for two hours straight on Saturday after soccer games. They took all their stuffed animals out and played so sweetly. Nice. 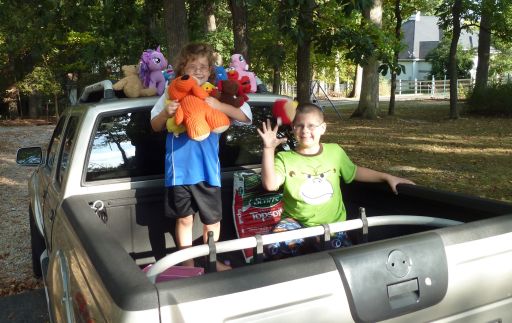 The truck went back today. I will miss it a bit – – she was a fun ride for sure. I’m thankful for the photo to remind me that my God will supply all my needs according to His riches in Christ Jesus. I look forward to seeing what He has up His sleeve next.

**The kids gave their input on what our next vehicle should be. KB wants something with a TV in it. Bubba suggested a RV saying, “It’s both a home and a vehicle.” Little quietly added that she would like to have an ambulance. While these are all precious suggestions in their own right, I would like to ask that you pray with us that the Lord would provide the car we need at the right time. Thanks!