Remember When I Went to DC?

My friend Debbie gave you her concise and well thought through observations on our trip to Washington, DC and she did a great job, eh? By the end of this post you will see just how different Debbie and I are AND you will see why we are perfect friends; opposites attract and all that.

I’ll start by telling you that Debbie’s husband absolutely rocks.  For Christmas he gave Debbie frequent flyer miles and hotel points so that we could spend some time together.  Honey gave me the okay to go and the commitment to keep the kids alive.  We DO have incredible husbands.  Thankfully our destination was decided for us through the process of coordinating flights using frequent flyer miles and available rooms using hotel points.  Debbie worked out all those details and I promised to help us navigate public transport and the unknown once we arrived.  See, perfect friends!

We met up in Atlanta and flew the last leg together.  We talked the entire trip and the ladies in front of us actually turned to look at us and whisper at one point.  I think we were the only people enjoying ourselves AT ALL. . . we WERE flying into the Capitol.  So, beginning in Atlanta and then throughout the rest of the weekend, this was basically my view of Deb: 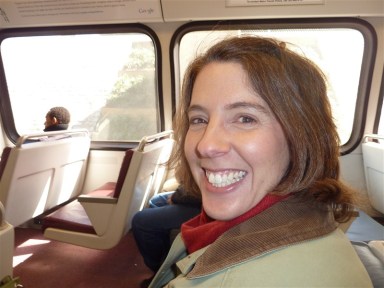 We spent over half of our time on public transportation (plane, bus, train, cab) which meant an optimal amount of talking time and a crick in our necks.  Our hotel was six miles from the metro station which was the equivalent of a 25 min. bus ride (the hotel shuttle didn’t run while we were there).  The metro ride was another 20 minutes into the city.  If you add in the time we got off when we should have stayed on. . . and the time they closed two stops and made everyone get off the train, hop on a waiting bus, ride 15 minutes to a station two down the line, get off the bus and get back on the train. . . we spent a LOT of time riding.  My motion sickness bracelets were well used.  I could be a spokesperson for those babies.  So thankful.

When we weren’t riding around, we were playing the tourists in a big way. . .

We both voted this was something we could have done without but it was worth doing – if that makes sense.  The permanent exhibit was great but morbid, of course.  The propaganda exhibit downstairs was actually pretty amazing and infuriating.  I was stunned by some of Hitler’s quotes and the overt and purposeful lies told to the people.  It’s three hours I’ll never get back but I pray God will redeem the time by using it to shape my character and deepen my love for people.

I remember going up in the Washington Monument when I was young – one of those things you aren’t allowed to freely do anymore.  You can tell by the photo that the day was beautiful and the wind was blowing just the right amount.  If you look at our shoes, you will see that Debbie has made the brilliant, and seemingly obvious, choice to wear tennis shoes. I, on the other hand, have revealed my thoughtless packing by wearing completely inappropriate clogs that KILLED my feet all day.  Good grief!

The Lincoln Memorial was a bit disturbing on multiple fronts.  There was a group of students sitting on the steps and one at a time they were standing and reading from papers they had written.  I initially thought they were each standing to recite the Gettysburg Address (hello, it’s only a paragraph long and this WAS the Lincoln Memorial) but came to realize that they were standing up to read individual speeches that began with “I have a dream. . .”  WHAT??? The Martin Luther King Memorial was across the street. . .

The other disturbing thing was the quote above Lincoln’s head. . .

All day, the one feeling that I couldn’t shake was that we had built these building as a sort of tribute to our greatness as a country.  We commemorate men who, while playing key roles in our history, were men just the same and lived lives of sin and needed a Savior.  Then we get to Lincoln (an amazing work of art, mind you) and it says, “In this TEMPLE. . .” and all these folks were walking around his feet looking up at him. . . it was reminiscent of my visit to the Golden Buddha in Thailand.  I didn’t like it.

Much of the Mall was under some sort of construction and our forced detour took us to the backside of this monument.  It turned out to the World War II monument and look which two states happened to be side by side!

Arlington Cemetery – We saw the changing of the guard at the tomb of the unknown soldier. 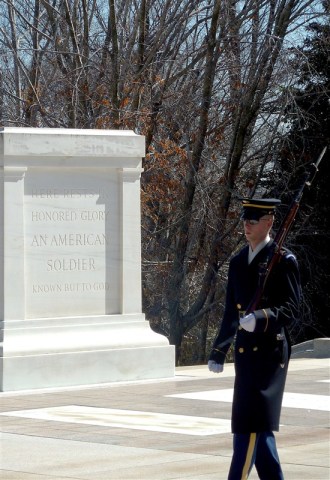 Debbie watches “DC Cupcakes” on TLC but I have never seen it.  Still, going to a place featured on one’s favorite TV show sounds like something I would do, so when Deb mentioned it (nonchalantly and in passing because she isn’t pushy like me) it went straight on my list of things we would make happen.

It was fun.   The man in front of us had NO IDEA where his companions had dragged him and he was cracking me up while we stood in this line:

The line moved pretty quickly and a kid kept walking by making sure we all had menus and were reading them so that the line could keep moving quickly.  Debbie got cupcakes for each family member at home. . . I was satisfied to just try one and see what the fuss was about.  This is my Thin Mint Cupcake:

My observations from this excursion were as follows:  (1) This was by far the best icing I have ever eaten in my entire life.  OH MY STARS.  It was worth standing in line for the icing alone.  (2) The cake wasn’t anything special but that was okay because it’s real purpose was to hold the earth’s best icing.  (3) The sisters who run this place are making a killing at $4/cupcake and the line remained two blocks long for over an hour withpeople ridiculous enough to pay it.  (4) I need to have a serious conversation with my own sister to discuss how we can exploit the masses in a similar fashion.

I was blessed to spend an hour with a seminary friend that I haven’t seen in six years.  Laura has three sons now and I got to meet them too.  They look JUST like they do on her blog – imagine that – but now I can hear their little voices as well! It was such a sweet treat to see their home and the church where they minister.

If you have made it this far, I will tell you about one last thing – food.  It’s funny – we really didn’t eat very much.  There was breakfast in the hotel and I was thrilled to have eggs that someone else scrambled.  We took bananas from the hotel to munch for lunch and I even forgot I had that most days.  But dinner was a special affair each night.

Debbie told you that we had bison and loved it.  The bookstore we ate in was made “famous” during the Clinton/Lewinsky trial.  Apparently he allegedly bought a book for Monica at this store and they were asked to turn over all receipts and they wouldn’t and, and, and. . . yes, we went just for the story that goes along with the bookstore and were just thankful that the food was yummy.

My favorite place we went was for dinner our first night in town.  The Hard Times Cafe is a chili restaurant that we literally stumbled upon in Old Town, Alexandria.

When we sat down and the waitress discovered that we had never been there before, we were given this

So we got to taste the four different types of chili they  prepare and then order our meal with confidence.  Debbie had Frito Pie and I had something with cornbread.  IT WAS DELICIOUS.

There you have it – way too much information about our trip to Washington, DC.  I wouldn’t trade a minute of it and I am just so thankful for God’s kindness to me. Can you see by my yapping on and on just how different Debbie and I are? But even with all our differences we would both agree it was a wonderful trip and we love each other dearly and we’re thankful for our minivans!

4 Responses to Remember When I Went to DC?