Christmas with the Kicks – the gifts

Posted on January 2, 2009 by thebluehutch
My mom starts shopping for Christmas in October – usually. This year she waited a bit longer and when she emailed me for a “suggestion” list, I was ready. I had seen these tents in a catalog for $13 and had shopped around a bit and found nothing I liked nearly as much and nothing as simple and adorable. Memom wasn’t sold on the idea because they didn’t seem bit enough for the kids to go in and really play, but they were way to big to fit anywhere. I wanted them so the kids could have somewhere to disappear and “read”, line up cars, quote the movie “Cars” or whatever. So, Memom ordered them and they were waiting for the children on Christmas morning. We also got Little and Bubba their own laptops. Moments after busting into the living room, this is what we saw (mommy knows best):

KB didn’t have a computer or tent.
She was completely taken with Cole’s dog.
The one he has slept with since he was little.
I think that is hilarious.

I had told my sister there would be no rushing the children. They operate on a slower reaction clock and if it took all day to open the presents then it would take all day. She had the hardest time. My sister LOVES to give and it killed her to wait to see the reactions as people opened the gifts from her.

My nephew didn’t have quite as hard a time waiting – he was given a NintendoDS. Can you tell he was excited? 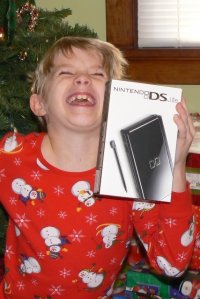 For the rest of the day he looked like this:

There was a little movement from my children. Little came out of her tent long enough to join KB in Bubba’s tent. (mommy knows best)

The guys got look-a-like pajama pants. They are knit pants that look like jeans – aren’t they FUN??

Little was given so many dress-up dresses. She modeled every single one and looked precious (of course). 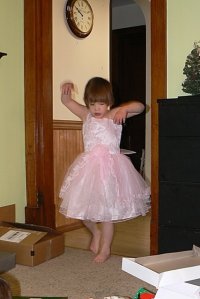 KB was given jewels and she sat patiently while I put them all on. Then she left them on. It was hilarious.

We finally brought in a mirror for her to see herself. She lit up. This could be trouble in our future. 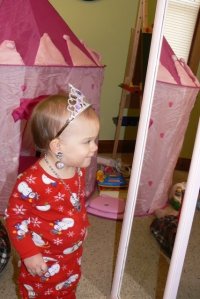 A day full of festivities and goodies and where did we find the kiddos?? IN THE TENT!!! (mommy knows best) 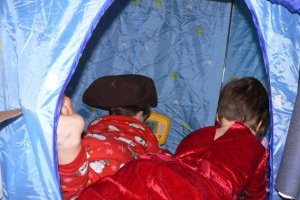 The only thing is, those tents are so big, there is no great place to put them. I guess my mommy knows best!!

2 Responses to Christmas with the Kicks – the gifts