Posted on December 7, 2011 by thebluehutch

On Halloween we were sitting in the living room when “Martha Speaks” went off and a cooking show came on.  KB wanted to watch it (she is determined to be a baker when she grows up) and they showed us how to make candy corn bark.  My sweet mom suggested we go make some right then (we being KB and I) and so we did.  My little girl was a happy girl! 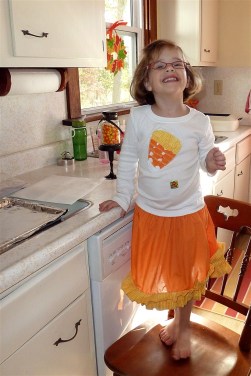 So you see KB in her candy corn outfit and you have seen her little spider ensemble:

Well, I had decided that Bubba is getting too big for applique shirts for every holiday and I was trying to be fine with that.  He walked up to me and asked where HIS candy corn shirt was.  I told him that ruffles were a bit girly for him but I would come up with something more appropriate.  I went to Pinterest and copied a monster shirt. . . 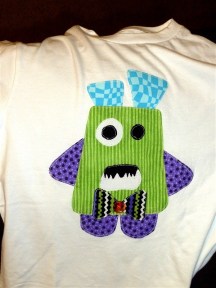 Then came Halloween.  We had been talking for months about Little being this flamingo but all it took was one boa near her neck and there was a need for new plan.   The feathers were a sensory nightmare and I wasn’t about to force it on her.  So, she ended up being a candy corn, Bubba was DJ Lance Rock from “Yo! Gabba Gabba!”, and KB was Strawberry Shortcake.  Such a cute crew! 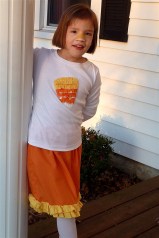 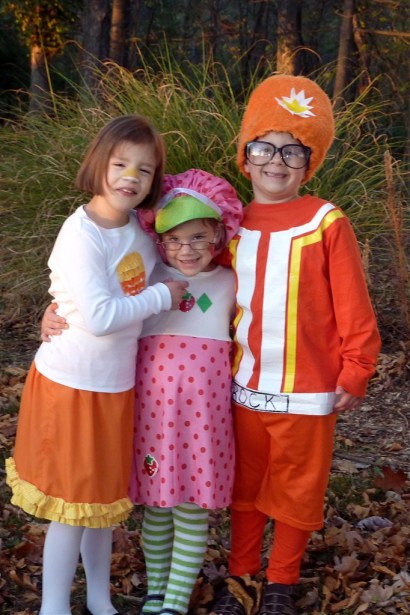 We went to a nearby neighborhood to see friends from church and then stayed to visit all their neighbors.  The best costume of the night was the stick figure we saw.  It was hilarious watching this teen come toward you in the dark.  (glow sticks stuck onto a black sweat suit) I asked her to please stop and let me have a photo.  She was a good sport!

It was, by far, my favorite Halloween ever.  The kids were all old enough to know what to do and really get into it.  Bubba even told a joke at each house that asked (a BIG thing in our town).  Hope your day was fun too!