Several of you have asked about my trip last weekend and it’s so nice of you to care.  I haven’t been avoiding you all, it’s just that I’ve been a little “off” this week and wasn’t really motivated to do anything.  But here I am trying to get back into the swing of things.

As you recall, four friends went away for four days to celebrate four decades.  Here we are in 1989:

And here we are in 2011 (Remember what your mama taught you, “If you don’t have anything nice to say, don’t say anything at all.”):

We had an absolute blast.  Everyone met in baggage claim and the chatter started then and didn’t really stop until 1:30PM on Sunday.  Other than constantly discussing our husbands, children, and trips to Disney, we also. . . . drove about 2 hours a day in our HHR. 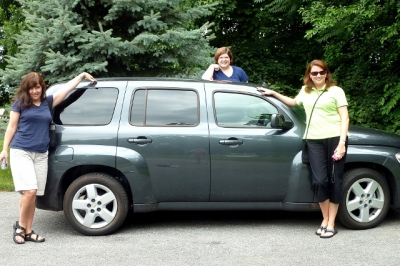 Visited Hershey, PA where we created our own personal candy bar (mine was milk chocolate and pretzels) and went to a tasting to learn how to distinguish the flavors in Hershey’s chocolate.  Good times!

We spent several hours learning about the Amish.  This included a film about Rumspringa , a tour of a one room school house and typical home, and a buggy ride. 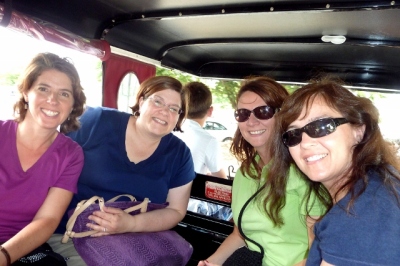 The best line of the weekend was spoken on this buggy ride.  The girl “driving” the buggy grew up in a Mennonite home and was attending University locally instead of joining the church and following typical cultural paths.  She said, “Yea, it’s ironic that I drive a buggy all summer to pay for my college tuition.”  Awesome.
The place we stayed was simple and comfortable and I would recommend it to anyone.  We lounged around each day until noon and then headed out for our “excursion”. 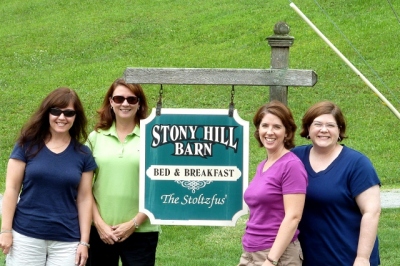 I wouldn’t trade the time, I tell you and I am already excited about doing it again.  The question is whether to wait five years or do something small in two (I have a friend who does this yearly).  I vote for two because, besides the joy of laughing, I learned a lot from these women.  Each of them have children that are older than mine (ranging from 14 to 9) and I learned so much from Heather telling of conversations she has had with her kids, Debbie explaining their decision to give her eldest a cell phone, and Monica’s submission to her husband and God’s work in them.
So, if you have friends (and I know you do!) plan a getaway and get caught up and encouraged.  You don’t have to travel to Amish Country to do it, but you wouldn’t be sorry if you did!