Posted on April 28, 2008 by thebluehutch
We spent two and a half hours in the emergency room last night! Yes, it was Bubba’s turn and now all three of my children (all ages four and under, mind you) have had their own personal trip to the ER. “Why did you go this time?” you ask. Well, it seems that Daddy and Bubba were rough housing before bed (a normal occurrence) and they misjudged each other’s next move. Bubba went to leap out of daddy’s reach as daddy went to launch Bubba forward. Bubba slammed into the headboard – a bookshelf

The lump on his head was instantaneously enormous and the screaming intense. The bump didn’t scare me (see, I even got Jeremy to take a photo) but when he started swaggering around and I noticed his pupils continually growing larger then smaller – – I got nervous. 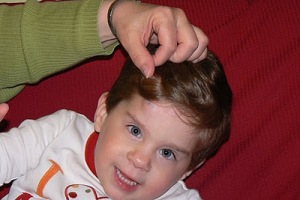 (I should tell you that the bump had settled quite a bit by the time we took this photo.)

Honey did a quick search online and came up with nothing so we called the doctor’s exchange. They didn’t call back and after 20 min. of watching his pupils grow and shrink I called 911 to get some questions answered. Instead – I got flashing lights, sirens, and two paramedics in the living room. The fact that Bubba didn’t jump up to go see the ambulance increased my concern and his lack of interest in the paramedics presence was the final straw. They suggested we take him in to make sure nothing was really wrong and then I goofed. I robbed my son of a cool ambulance ride and took him in the van. One day that will come back to haunt me. Honey finished the paperwork with the paramedics and called friends to come sit with the girls so he could join me.

After two hours of waiting, a doctor came in and told us that the diagnosis was. . .an ear infection. Yes folks – a Hematoma (fancy word for bruise) and an ear infection. We took our Amoxicillin prescription and headed home.

Today, not wanting to be outdone, KB knocked herself in the head with a toy and gave herself a tiny shiner of her own.